The ski gods graced us with a picture-perfect early-season ski day for the first stop of the inaugural FREESKIER Buyer’s Guide Live Demo Tour in Vail, Colorado. The sun was out and the stoke was fiery as skiers by the hundreds––hungry to test out the best of this year’s skis from 20 different brands, including Armada, Atomic, Blizzard, Dynastar, Elan, Faction, Fischer, Folsom, HEAD, ROMP, RMU, Icelantic, K2, Kästle, Liberty, Line, Nordica, Rossignol, Salomon and Völkl––lined up at the base of Gondola One long before the lifts started spinning at 9 a.m.

Bell to bell, eager snow sliders tested out as many planks as their legs could handle to get a feel for what’s new this season and what will make it on their holiday wish-lists. From the new daily drivers to carving skis, powderhounds and certified quiver-killers, no pair of planks were left unturned on Vail’s 68 trails and 947 acres of early season terrain. After all was skied and done, stop one of the Buyer’s Guide Live Demo Tour exceeded all expectations from brand reps, lucky participants and the FREESKIER team, alike.

To cap off the successful full-day demo, Brother’s Keeper carried the stoke to Shakedown Bar in Vail Village for a proper Saturday aprés party. Weary legs and tired eyes were no match for the half-off libations and live rock n’ roll and just when skiers thought it couldn’t get any better, the free gear started flying. Along with dozens of goggles from POC, the FREESKIER crew gifted one lucky winner with a pair of J Skis x FREESKIER custom The Metal skis.

Got a serious case of FOMO? FREESKIER will be in Killington, Vermont, next Saturday, December 14, for the second stop of the tour, and it doesn’t end there. On December 21, the Buyer’s Guide Live Demo Tour commences at Copper Mountain just in time for last-minute holiday gift ideas. 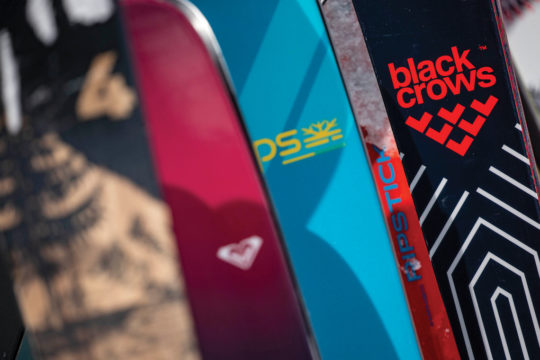 The post The first stop of FREESKIER’s inaugural Buyer’s Guide Live Demo Tour at Vail was a smashing success appeared first on FREESKIER.

...and get fresh tracks on the latest gogglesforski deals, tips and news! ​